Garrett had another great night at home and sleep last night. He has been very good about getting up every 2 hours and go going the bathroom and empty his bladder.  Again when Garrett woke up he had a huge appetite and wanted to eat breakfast. This is something new for him. Before when he was on dialysis, he never woke up hungry. He always feeling sick and never wanted to eat.  For the second day in a row he wanted scrambled eggs with chicken in it. This is very exciting.  Again he had a great nights sleep.

Yesterday on our afternoon walk we went by the High School and a baseball game was going on. We stopped and watched an inning or so. Garrett loved seeing his old friends and coaches out there. He had to get home before mom caught him at the game because she wants nobody breathing on him.

Tomorrow we have our first clinic appointment back at UCSF. We are looking forward to seeing our doctors and getting back test results to see how well that Super kidney is doing.

Yesterday we had a great visit with Jerran at our house. On the drive home the boys had the SNL jeopardy skit on their phone . Jerren laugh so hard he thought his stitches were going to rip out. Garrett is looking forward to the many visits he will have with Jerran in the future. 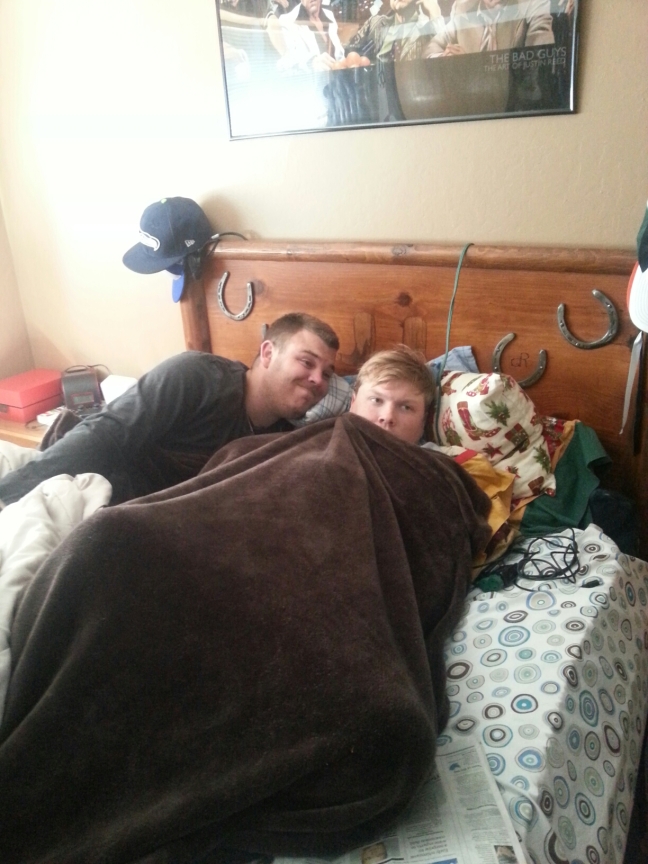 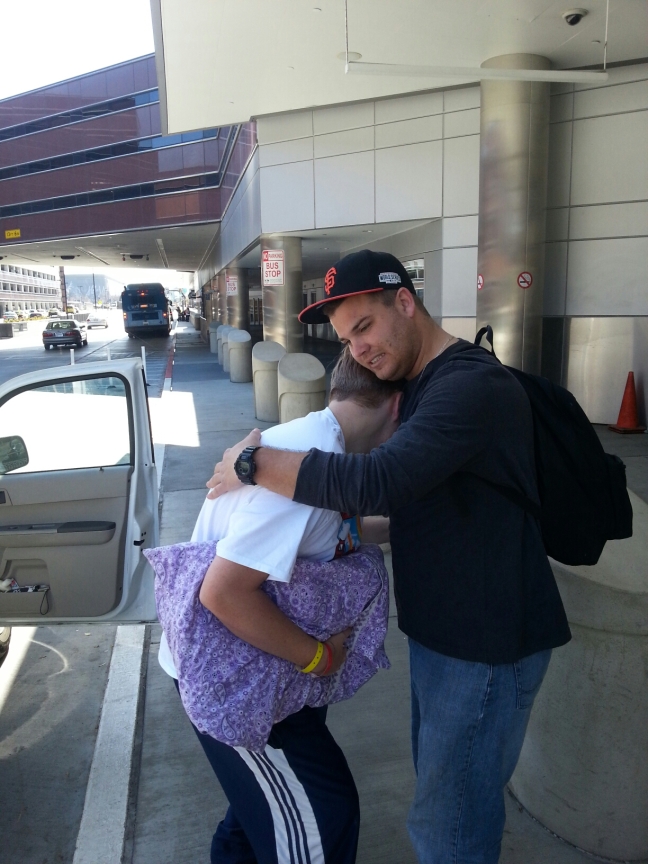 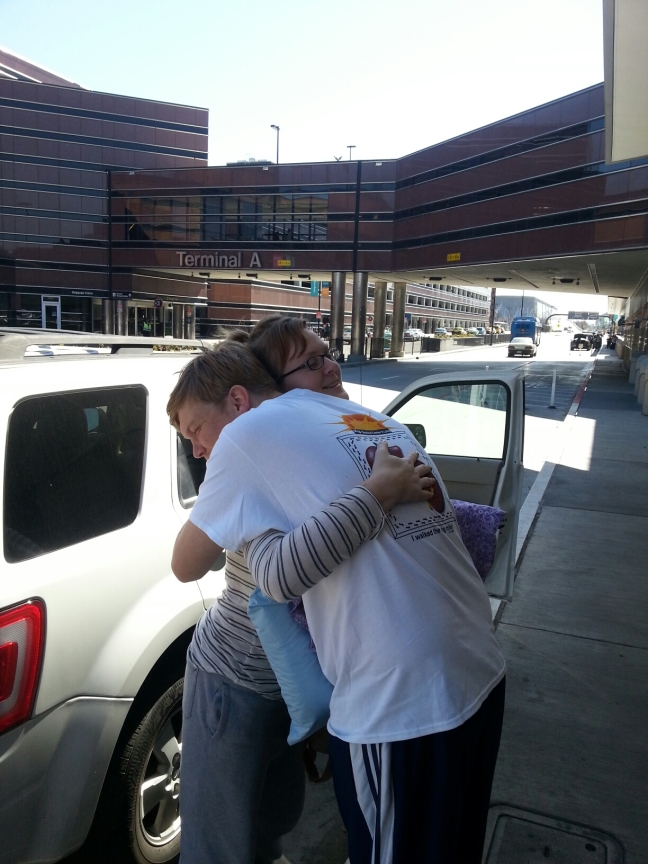 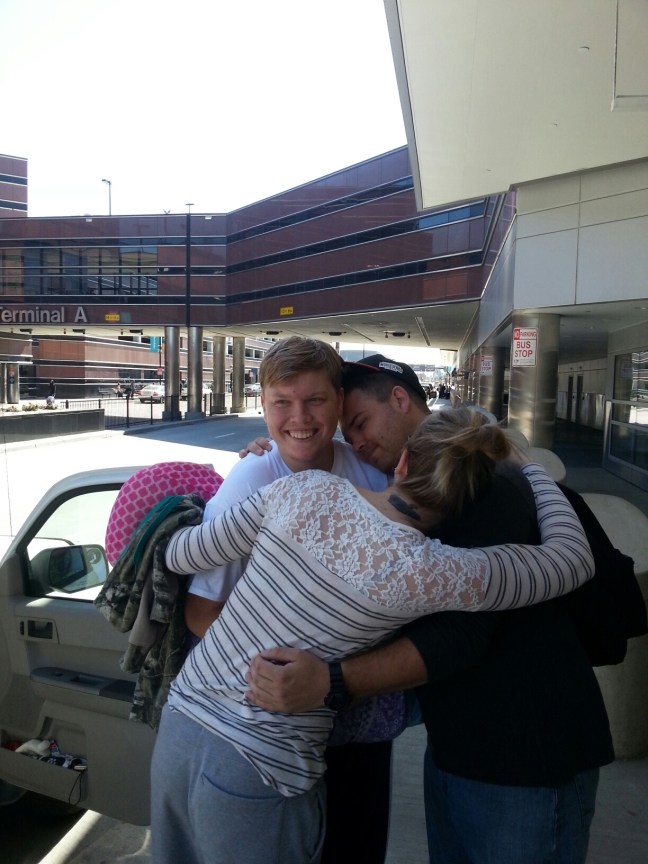 We would like everybody to keep the Tran family in their thoughts  and prayers. They lost their son, Thaddeus this week, to cancer.

Garrett set his alarm so he could wake up to pee–have to keep that pressure off the new kidney. Liz got up at 3:00 am and everything was great. Garrett was feeling really good.

This morning Gary woke Garrett up and he said, “That’s the best night of sleep I have ever had. I had a pool of drool and can’t remember the last time that happened. ”

Gary said that simple statement almost made him cry. Sleep is so precious and healing.  And we all want the best for our kids.

Garrett ate breakfast and took his meds. No problems. No nausea, no vomiting. 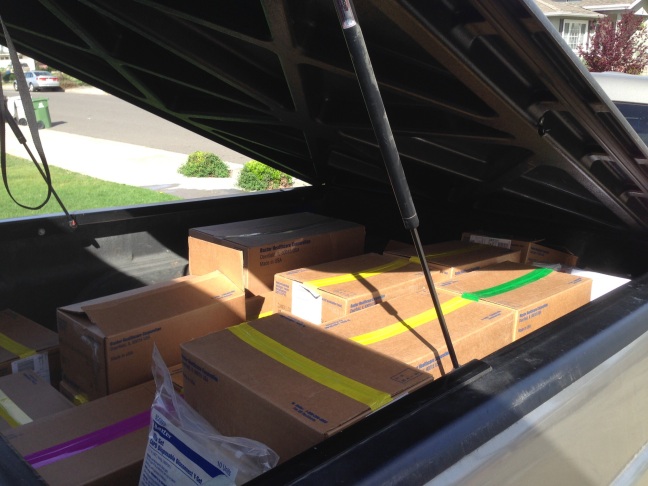 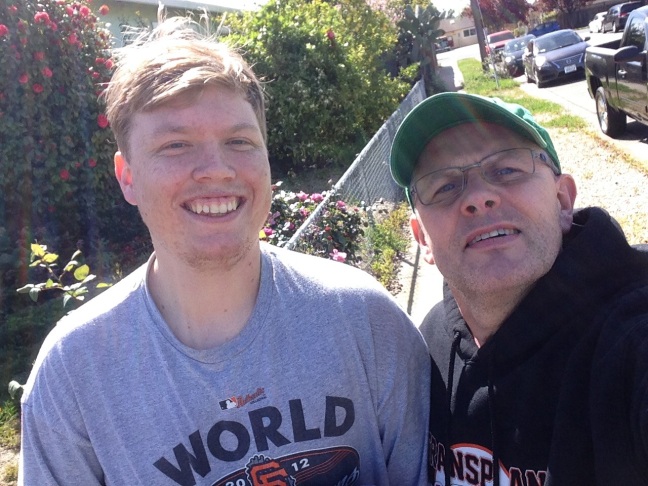 Jerran’s already going stir crazy. Gary picked him up to hang with Garrett. They got their walk in. 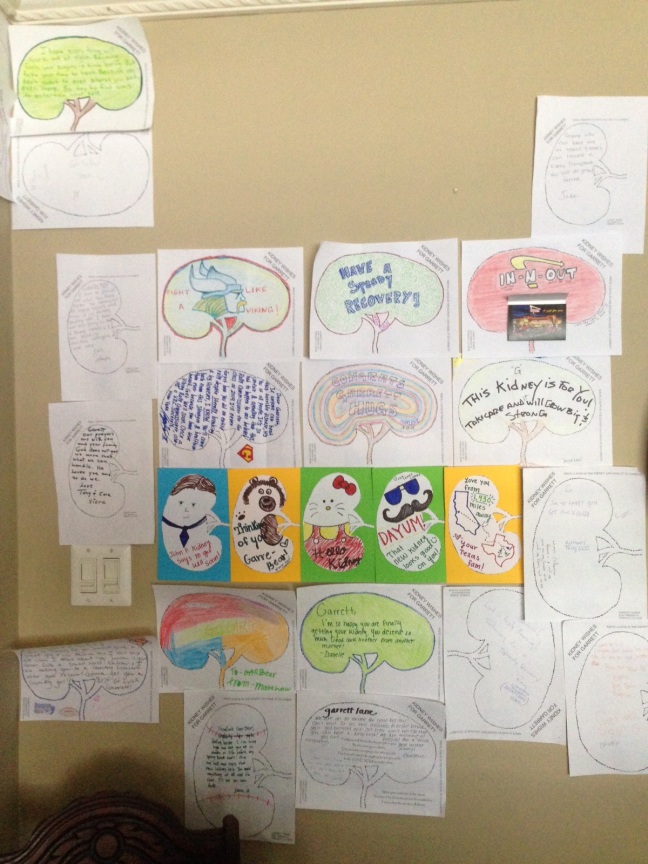 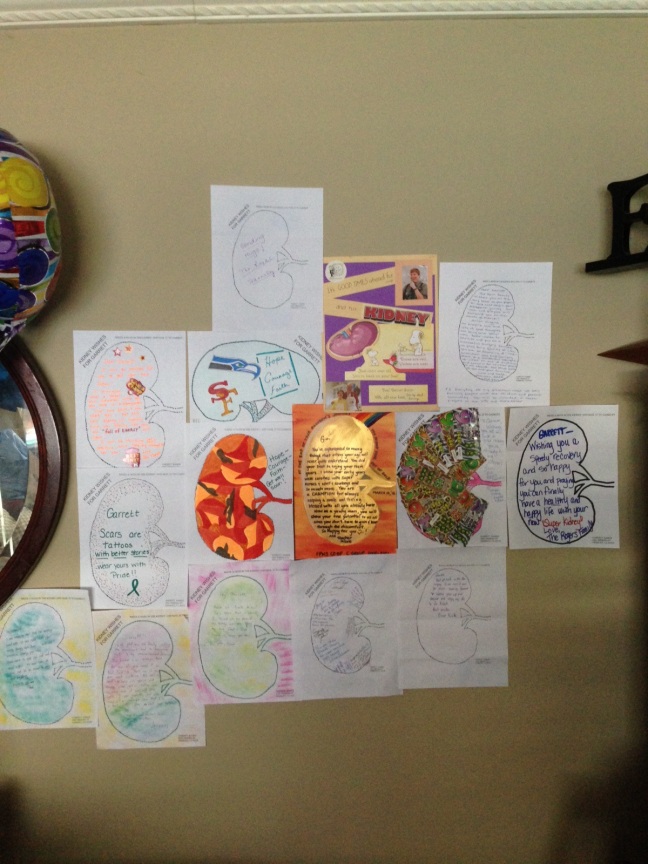 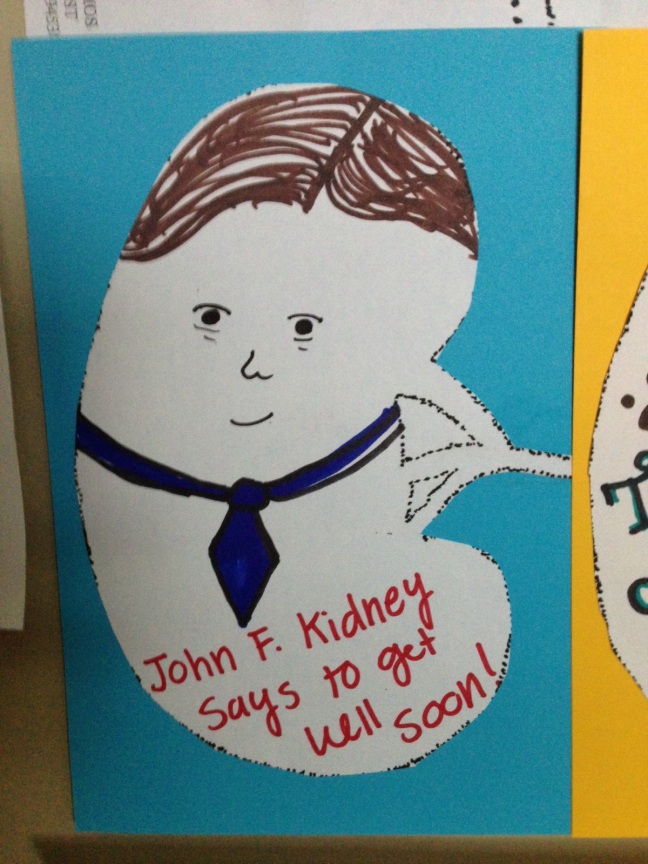 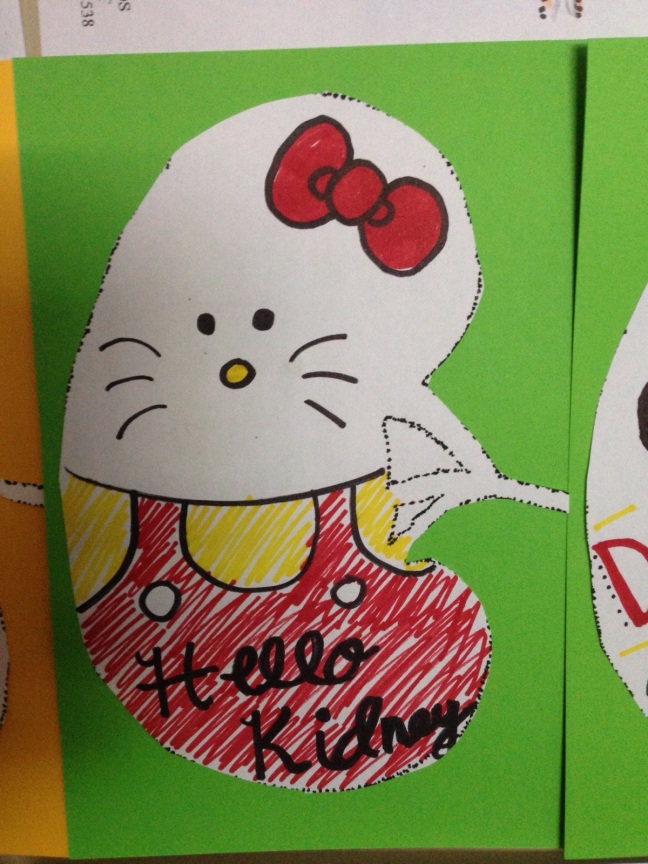 Kidney wishes to brighten up Garrett’s room and keep him focused on getting better. 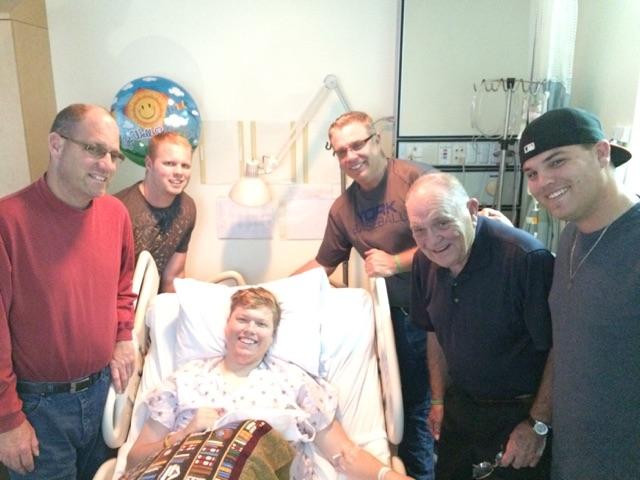 Great news,  Garrett is waiting for his discharge papers and we are going home.  He has had excellent care here at UCSF but it’s time to go home.

First and foremost Garrett’s new kidney is working perfect.   There have been no issues whatsoever with it.  Jerran truly has or had a super kidney. It just seems that Garrett had a bad reaction to one of his medications.

Another issue he ran into was he was getting nauseous every time he took his rejection medication.   This is a common side effect of one of them so that medication was changed. He did great last night and today on the new medication.

The only problem we have right now is his high blood pressure.   It is controlled enough for us to go home.  They will be monitoring it in our weekly clinics.

It was a great weekend having his two brothers home. Yesterday we had a great visit before Trevor had to fly home.  We are lucky enough to have J.T. and Kayla here till Wednesday night. 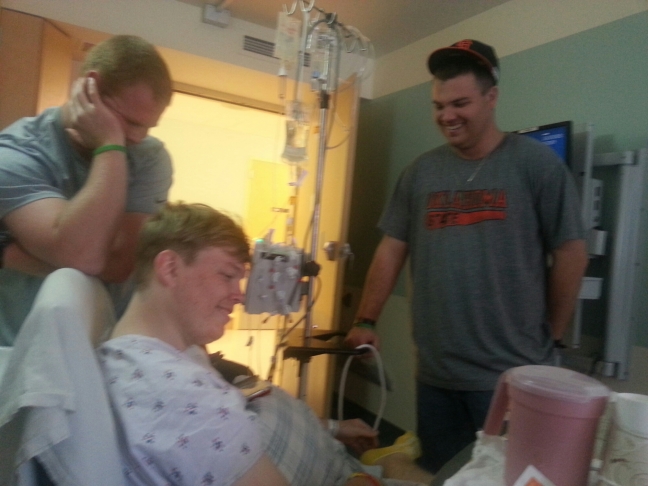 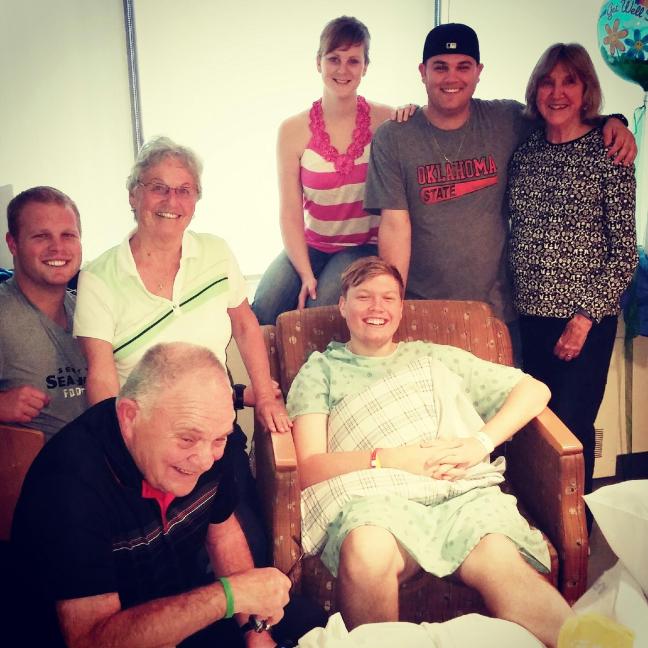 Today the best birthday present Liz could get, is having Garrett come home. 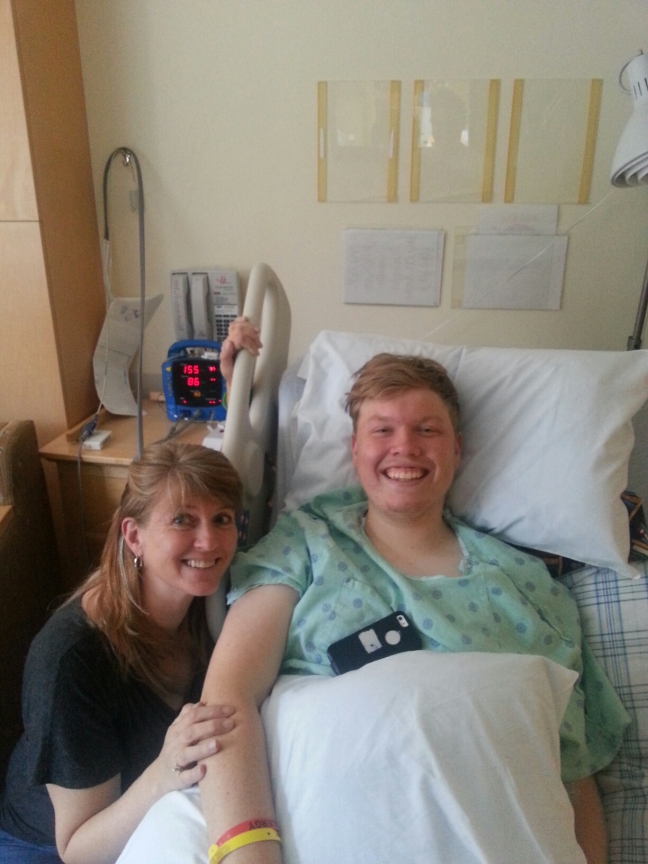 Garrett slept a lot yesterday so last night his sleep was off and on.  His body is generally just sore from being in bed.

This morning he ate almost a whole breakfast sandwich, by far the most food he has eaten at once.  He then walked a couple of laps with mom.

He took his morning meds and again he felt nauseous.   He was given a shot and it calmed his stomach.

The doctors decided to keep him one more night and are adjusting his medication.   Since this medication will be a part of his life the doctors want to get this right.  Hopefully we can get it right and get him feeling better.

Garrett is looking forward to his brothers returning to the hospital today. He will get to visit for several hours with them before Trevor has to fly home.  We were lucky Trevor was given Friday off of the academy so he could spend the weekend with his brothers.

Before Justin and Trevor come to the hospital they are going to visit with their new brother, Jerran.   Garrett is bummed he won’t be there, but like he said, “June is right around the corner and we will all be better and together. ”  He is always so positive.

Garrett thanks everyone for their wishes and prayers.

Garrett spent most of the day taking naps.  This afternoon both of his brothers, Justin and Trevor, got to the hospital. That always lifts his spirits.

Garrett, his brothers, his grandparents, uncle Joe and Kayla all played a game of hangman on a whiteboard in the waiting room.

Around 5:00 pm Garrett was moved back to 9 Long.  It has been fun to see the great nursing staff again. They all have come by happy to see Garrett but wished it was somewhere else.

Garrett was able to walk a couple of laps tonight.  We meet with the doctors in the morning and will see if we get to go home. That’s the plan anyway. 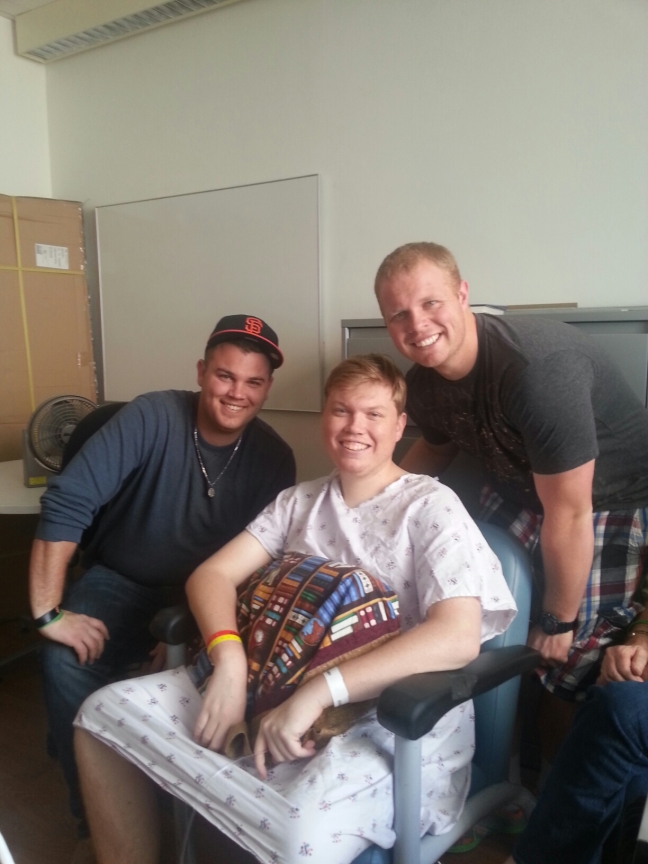 Garrett with brothers Justin and Trevor just before playing hangman.  These two are the best medicine for Gbaby. 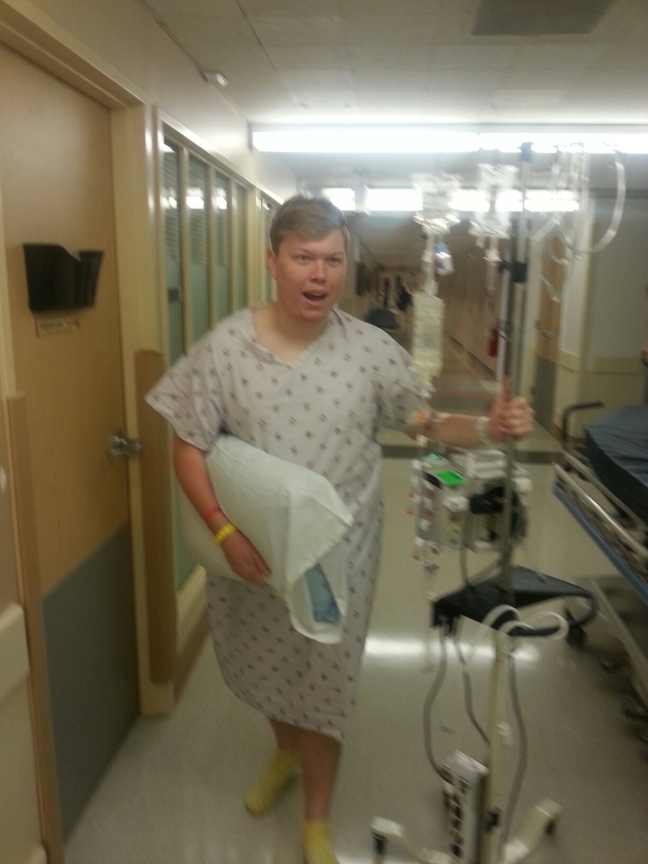 A couple of laps with mom.

Saw the doctors at UCSF. They say everything looks good. Super kidney is SUPER and there is nothing wrong with it.

Garrett was admitted to another floor, but staff is moving Garrett back down to 9 Long, the Transplant Unit. This floor has old school TVs!

Most likely just a reaction to one of the new meds. Fever is always a concern but they are not worried. Blood work, kidney function and everything else is completely normal! 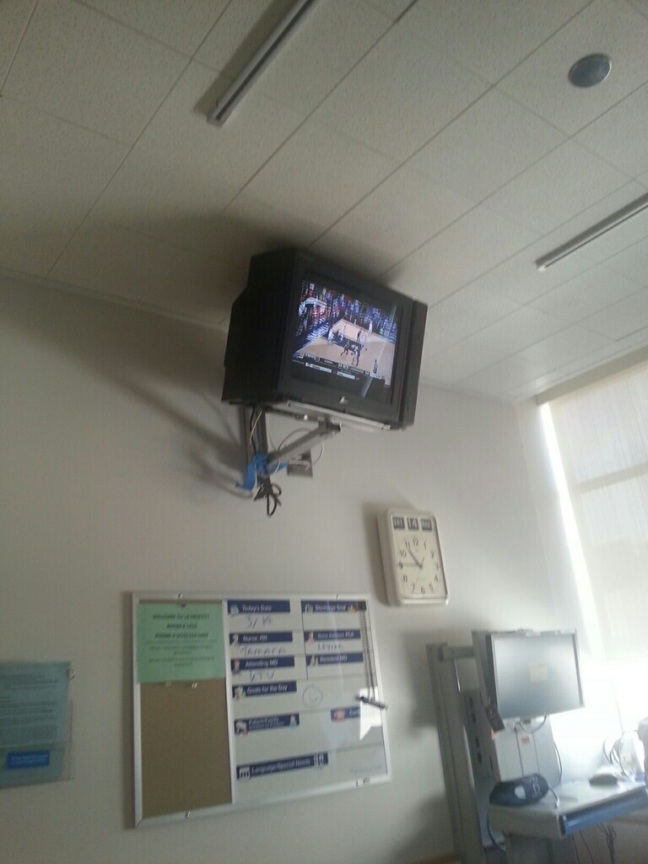 Garrett had some vomiting and chest pains late tonight. We took him to the local ER, where they did a CAT scan and chest X-ray. 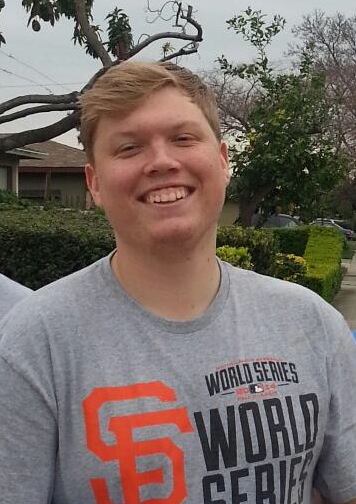 ﻿He moved during the CAT scan (no doubt he was uncomfortable and in pain) so they weren’t able to get a good reading.

At this point, they watch for blood clots, so to be careful, he’ll be transported by ambulance back to UCSF where they will do a thorough check.

We feel like maybe he just over did it a bit and this is a hiccup on the road to recovery. But it’ll be a long night for everyone, and we ask for your continued prayers.